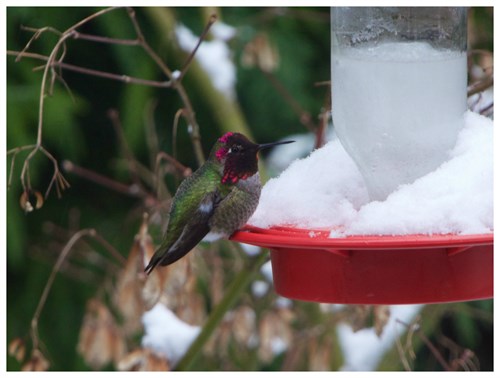 I knew from the pervasive silence outside our bedroom window that it had snowed during the night - probably not much (we rarely get more than an inch or two each winter) but enough. Grabbing something warm to put on I raced downstairs, into the kitchen, and out the backdoor but he was already there, waiting.

Living in the Pacific Northwest, we see hummingbirds throughout the entire year; Rufous in the spring and summer and Anna’s in the autumn and winter. And just as I suspected, there on our snow-covered hummingbird feeder sat the little Anna’s Hummingbird male we’d been seeing for the past few weeks. The snow was too deep for him to get to the hole leading to the sugar water he needed to power his race-car metabolism, but he was likely too cold to go anywhere else to seek out a better option.

Not wanting to disturb him unduly, I slowly approached. He didn’t move but simply turned his head to look at me. With as few unnecessary movements as possible, I used my fingers to dig down to the feeder’s top and open a clearing for one of the ports. I had only taken one step back when he plunged his bill into it and began to drink deeply. I would wait until he had finished and gone off on his rounds before clearing the rest of the feeder.

As I turned to go back inside, it was only then that my wife, waiting at the door with a towel, brought my attention to the fact that I had neglected to put my shoes on and so had been standing in the snow barefoot. It’s a gentle madness.

The Future of Astronomy: Celestron’s Young Astronomers at NEAF 2018