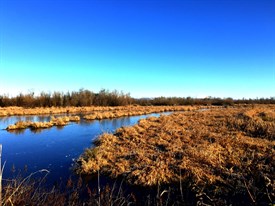 As I stepped away from my old Toyota RAV and onto the long-abandoned Crown Zellerbach yarding road that crossed through the bottomlands outside of the small town of Scappoose, Oregon, I could hear the trumpeting of Sandhill Cranes in the distance. The air was sunny and cold. Downed tree limbs still lay strewn across the landscape from the unusually strong windstorm that hit the area just before Christmas. Then, out of the corner of my eye, the stillness was broken by movement - the twitching of an American Kestrel’s tail as it sat perched on a power line near the road. I took out my iPhone and tapped the eBird app I had recently added to it. “American Kestrel - 1.” And so it began.

I don’t usually take my phone out of my pocket while I’m afield - I consider it somewhat akin to texting in church; something just not done. However I’d made a decision to do something in 2016 that I haven’t done in years: keep an accurate count of just how many birds I see over the course of my ramblings and travels. Oh I once did; for years, in fact. However as my family and professional responsibilities increased, I found it was all I could do just to get outside in the first place; writing down everything I’d seen in one master journal simply fell by the wayside.

But in the months since I joined Celestron as the company’s product manager for sports optics and unofficial naturalist, repeated inquiries regarding how many different birds I saw each year began to pique my own curiosity. What with all my travels  for the company to various birding and nature events, both in the U.S. and internationally, as well as my own personal rambles through my favorite local patches, just how many species of bird do I see in a year? There was really only one way to find out: a big year.

Now, don’t go getting the idea that I’m trying to be Noah Stryker (for one, he’s taller than I am). My own big year will undoubtedly be more modest - which fits nicely with how I see birding. I don’t plan to do any chasing (although if an opportunity within reason presents itself…) or mount expeditions to far-off birding hot-spots; I’ll leave that to those with far more energy and available time than I have.

What I will be doing is recording in eBird (under the name Celestron Birding - feel free to send a contact request) all the bird species I see and identify over the course of my local wanderings and business travels during 2016. Nothing fancy, no gimmicks; just birding the way most birders do. I’ll also be publishing more-or-less regular blog posts here, and posting any interesting discoveries (as well as some that might not be so interesting) and milestones to Celestron’s social media accounts with the hashtag #celestronbirding.

Seem reasonable? Oh, and by the way, as for the first species recorded on that first day of the year walk:

Thirteen species in all. Good thing I’m not superstitious.