This article is the part of a series on comets contributed by Tammy Plotner. Tammy is a professional astronomy author, President Emeritus of Warren Rupp Observatory and retired Astronomical League Executive Secretary. She was the first woman astronomer to achieve Comet Hunter’s Gold Status.

Regardless of whether you stay up late or get up early, right now is the time to enjoy a plethora of bright comets. It isn’t often that there is a comet which can be easily seen with smaller backyard telescopes—and we currently have not only one, but four to enjoy! Why not put on some coffee and see what’s out there to catch before the dawn’s early light?

Discovered on September 21, 2012, by Artyom-Kislovodsk and Vitaly Nevsky using the International Scientific Optical Network's (ISON) 0.4 meter reflector, Comet 2012 S1 ISON has probably been one of the most widely discussed Oort Cloud visitors in a long time. Will it be as bright as expected? Will it break up? Questions and controversy abound, but the sheer joy of having a comet to observe should eclipse all the talk! Why waste an opportunity when you could be out there, checking it out for yourself? Check out this photo of ISON taken on October 26: 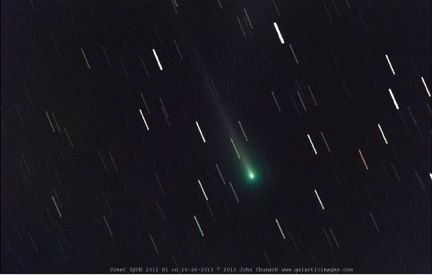 As you can see, the nucleus of Comet ISON is quite strong and the coma is estimated to be about 3 to 4 arc minutes in size with the tail extending out of the frame. At roughly magnitude 9, this makes the comet about twice the size and nearly the same brightness as the Ring Nebula (M57)! Needless to say, it would still be a difficult object for larger binoculars, but it is well within the capabilities of the average 114-150 mm reflector and possible a 102 mm refractor telescope. If you don’t know when to catch ISON, here are some key dates chosen by either when the sky will be dark or the comet passes near a celestial landmark:

As you may have noticed on November 25, Comet ISON will also be very near a returning traveler who recently reappeared on the scene: Comet 2/P Encke. It was first put on record in 1786 by Charles Messier’s assistant, Pierre Mechain, but it wasn’t acknowledged as the second periodic comet until 1819 when its orbit was computed by Johann Franz Encke. It is the shortest journeying comet of all, returning every three years; through sheer coincidence, this year happens to be one when it reaches perihelion! Let’s take a look at Encke captured on October 26: 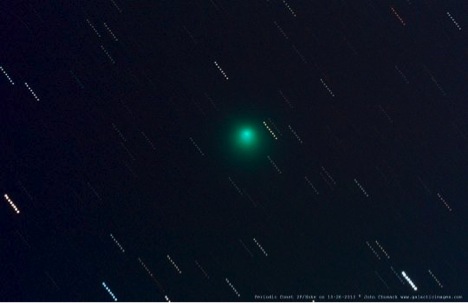 While Comet Encke doesn’t have much of a tail yet, it is still a strong presence and is roughly a magnitude 8. Because it is still “firing up,” when viewed through a mid-sized telescope it will have a sharp, small nucleus and a relatively wide coma—very similar in appearance to a planetary nebula! So, when and where can you locate Encke? Let’s have a look at a few key dates:

Still having fun? Then don’t head back to bed just yet—there are even more morning comets to go around! A cometary newcomer arrived on September 9, 2013, discovered by Terry Lovejoy on CCD images obtained with a 20-cm f/2.1 Schmidt-Cassegrain reflector on two nights. The new comet has been designated C/2013 R1 (LOVEJOY). Faint? You bet. But it is within reach of larger amateur telescopes and it’s definitely on the move! Here’s a still image taken on October 26 and a listing of dates to check it out: 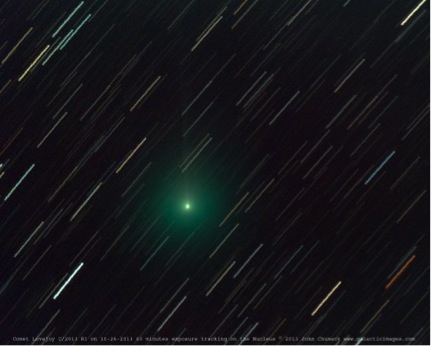 While Comet Lovejoy rolled across that portion of the sky, another comet decided it was time to break the ice! Comet 2012 X1 LINEAR was a lowly magnitude 14 visitor in Coma Berenices until the unexpected happened—an outburst! As luck would have it, professional astrophotographer John Chumack, was on the scene and captured the event on camera. “It is over 100-fold brighter at 8th magnitude and expanding!” John observed of his encounter. “It was low on the horizon at dawn, and tough to get. It just cleared the trees at 7:07am in bright dawn light. I managed a couple of quick shots before my CCD was flooded completely with light.” Let’s have a look at John’s discovery: 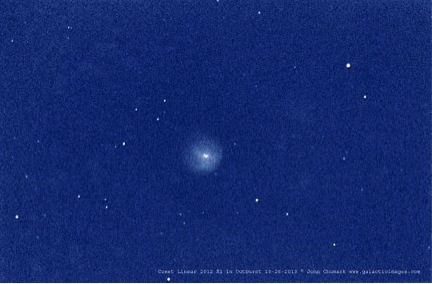 In Chelmsford, UK, amateur astronomer Nick James was also photographing Comet 2012/X1 LINEAR on October 26 with his 11-inch Celestron telescope. His observations show the comet’s coma expanding over a period of two days. “The coma’s diameter is increasing at a rate of 30 arc seconds per day,” commented James. “At a distance of 2.95 AU this corresponds to 65,000 km/day or a little less than 1 km/s.”

Discovered on December 8, 2012, by the Lincoln Laboratory Near-Earth Asteroid Research project, Comet X1 LINEAR wasn’t exactly predicted to be an exciting apparition, but it has certainly changed some minds, as well as the positions of observing telescopes. How bright will it get? Like ISON, we don’t know, but here is another list of “magic” dates and estimated magnitudes:

Will this quartet of comets dazzle the eye? Perhaps ISON might, but realistically, the other comets won’t be as impressive. To the visual observer, they will appear as little more than small, round contrast changes, often resembling an elliptical galaxy or planetary nebula. There are even comets which look very much like an unresolved globular cluster. Because they don’t always stand out with a dramatic tail, splashy coma, and intense nucleus, you can see how comets were often mistaken as deep space objects many years ago. It’s no small wonder that Charles Messier created his famous list of “non-comet” objects!

Unlike a galaxy or nebula, comets are objects on the move. Since not everyone will be observing at the exact same time from the exact same location, that means the coordinates given here are only approximate and will get you in the general position. The same holds true of the magnitude values. Comets are volatile creatures and can change without notice. While you are observing, take the opportunity to make notes and do a rough sketch. It might seem like a bother at the time, but some day you may want these simple documents to help you achieve a comet-observing award. No matter what, with four great comets to be seen in the early morning sky, it’s a great time to brew another pot of coffee and enjoy the sunrise show!

On the 16th anniversary of NASA's International Space Station, we look back to when we...