When it comes to skulky birds, few in North America can rival the Swainson's Thrush. They're not quiet birds, mind you. Go outdoors on most any June day in just about any forest along the west coast of the United States or throughout the northern part of Canada and you'll hear their ethereal, flute-like calls from early morning until late evening. Just don't hope to see one. 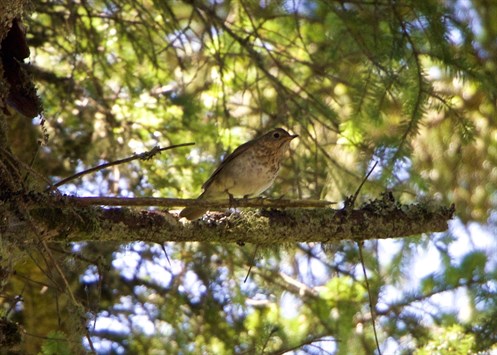 Living on the east slope of the Coast Range in Oregon, Swainson's Thrushes are a yard bird for me (my "yard," of course, being a shady stand of century-old conifers). Every summer, I'm treated to the vivid indigo blues of Steller's Jays, the rusty browns of Rufous Hummingbirds, and the flashes of vibrant red adorning the feather shafts of Northern Flickers. I'm also blessed with a chorus of Swainson's Thrushes, which, given that I've never yet seen so much as a single one on the property in twenty years of owning it, has led me to believe - despite the photos in my many field guides - may be an as-of-yet undescribed subspecies that is either a mottled dark green and brown in color, or perhaps simply transparent.

Thus, while hiking through the trails at Fort Clatsop National Park this past weekend, listening to the songs of at least half a dozen Swainson's Thrushes swirling through the hemlocks, I was suddenly surprised by a flash of brown darting in front of me and into the lower branches of a nearby tree. Assuming it to be another American Robin, of which I'd seen quite a few that afternoon, I raised my TrailSeeker 8x32 into position for a quick look "just in case."

"Just in case" immediately proved itself worthwhile, for rather than a robin, the thrush I was looking at was none other than a Swainson's Thrush! Swinging my Canon 70D into position, I managed to depress the shutter button three times before the bird decided a more distant tree was preferable to the one near the trail and just like that it was gone.

In all my years of bird watching, I had never before managed to capture a photograph of a Swainson's Thrush; now I have three. Admittedly, none of these three are particularly good - the one above is the best of the lot - but its at least recognizable. And for as skulky a bird as the Swainson's Thrush, I'll take them.