Sitting exactly on the terminator here, just above center, with half the crater in light and half in dark, is the 88km diameter crater Tycho.

It's a young crater has craters go on the moon, being less than a billion years old. This is why it looks so crisp with a sharp rim not yet eroded by smaller meteorite impacts. Just below it is the larger and much older crater Maginus (168km diameter) whose age may stretch back as far as 4.5 billion years. Note how the walls are heavily eroded by smaller impacts over the thousands of millennia. At the very bottom of the image we see most of the monster crater Clavius (231km) with an age between these first two craters. To the right of Maginus, halfway to the edge of this image is the oddball crater Heraclitus, an oblong feature with a crater at the lower end and a larger one at the other end to the upper right. This latter crater is Licetus (77km). You will see that this crater too is rather weather beaten being about the same age as Maginus. Above Licetus is a large flat floored crater Stofler (129km).

Notice the delicate striated shadings on its floor.

Zoom in on Tycho and you'll see that some of the features about the crater are soft and not crisp in detail like Tycho. These features were covered by the "ejecta blanket" of material expelled from Tycho during the few minutes of it's formation. There are also gouges and valleys carved out in those few minutes and chains of secondary craters formed from the larger material that was excavated during the impact. The density of these secondary craters falls off as you move radially away from the center of Tycho, a clear indication of origin. Lastly, notice the smaller crater to the upper right of Tycho with the clear central peak. This is Ball (44km) with high terraced walls very evident in this image.

Most of the data taking information is in the nameplate on the image.

Each of the 3 images that make up this montage were made from 500 frames of 1500 frame AVIs stacked with AviStack2 and further processed with GIMP and IrfanView. 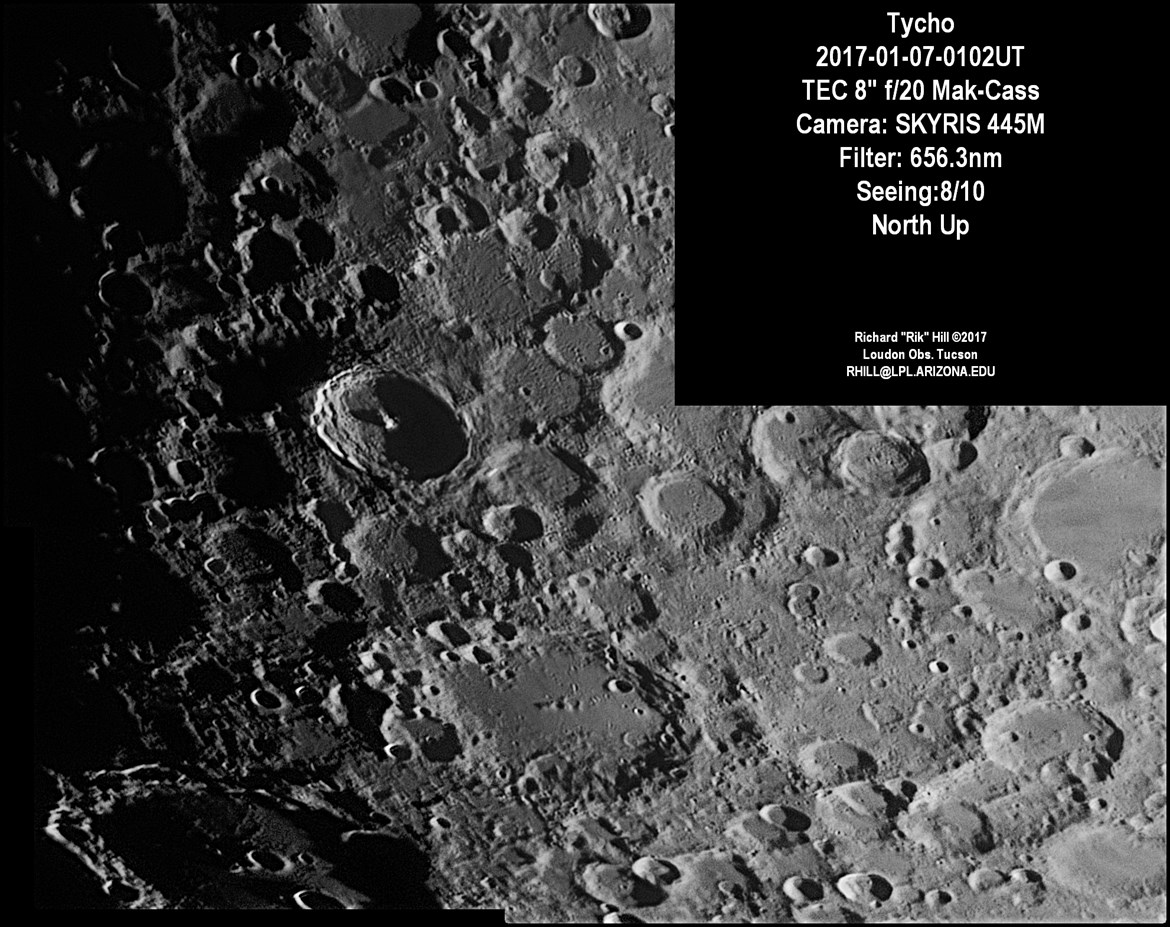